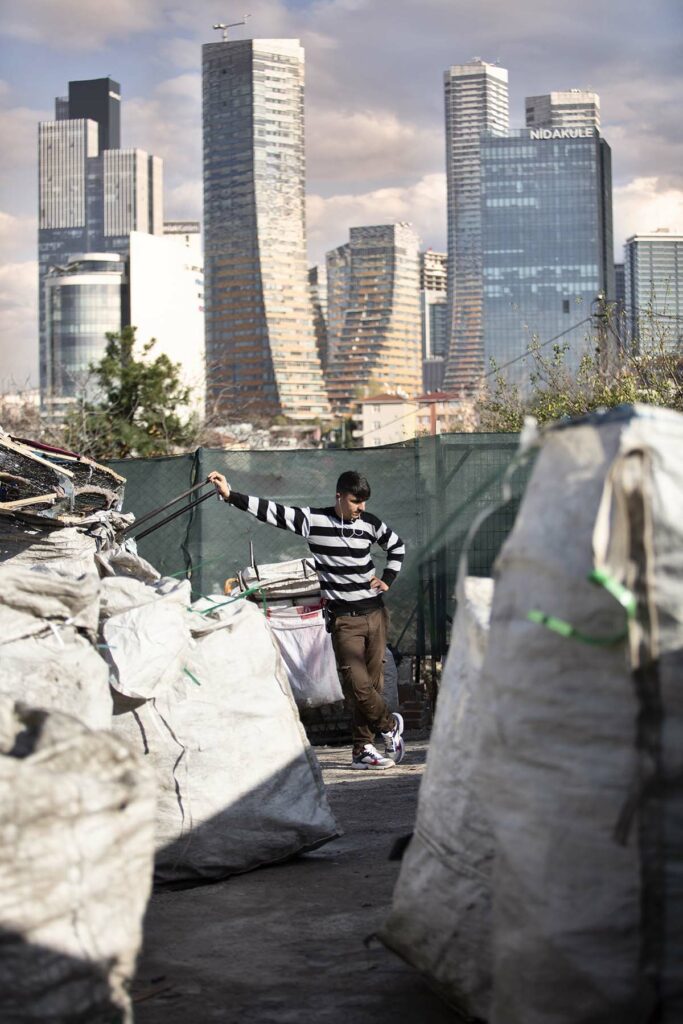 Every day, 30,000 invisible individuals collect and separate the household waste of 15.5 million people. They have no contracts and work 15 to 16 hours a day for the equivalent of $5 to $10. This is happening in the seventh most populous city in the world – Istanbul.
Most are Turkish Kurds who emigrated from the poor areas of eastern Anatolia. They have a very low social status. However, there are also Afghan, Syrian and African immigrants without official papers.
They are homeless and sleep, next to the rubbish, in one of the 1,250 refuse collection centres around the city.
There are also women and many children among them. For undocumented non-Turks (and most of them do not have official papers) anti- Covid vaccinations do not exist.
These people live in the margins in appalling conditions. They are forced to do so to support a multi-million dollar business that has established Turkey as the main European waste hub.

Ali Mendillioğlu is the president of a trade association linked to DİSK, the main Turkish trade union. According to him, the story began in 2004. Due to the EU annexation process and the consequent need to comply with standards set by Brussels, Turkey began to regulate the packaging waste sector. However, very little was done, and recycling was only made compulsory for shopping centres and the public sector. Invisible workers continued to do most of the recycling work.
The 2015 Paris agreement on climate change, also ratified by Turkey, gave new impetus to the sector. With the support of important financial groups, the state invested a lot of money. However, monopolies were favoured thus making basic working conditions even more precarious.

Mendillioğlu continues: “They ask us what improvements we expected? It is an absurd question. Why did thousands of Kurds come to Istanbul to work in the refuse industry in the 1990s? If, at home, they were guaranteed a safe job and compensation for accidents, they would gladly return to their villages to work as farmers. This work should not exist, and we must fight to eliminate its causes. In this country, these include repression, economic instability and unpredictability. If there is a swamp, there will always be flies. Our problem is the swamp.”